With this I want to announce another member of the AthosGEO Blend family: the Planner module! It is there to fill the gap between long and medium term planning and daily production. It is the answer to the question: Now I have a yearly plan, but how can I ensure that it is properly followed? How can I realize the promised benefit from day to day?

The AthosGEO Blend module family consists now of 3 modules that are quickly characterized as follows:

Cement is a standardized industrial product. Customers are relying on the fact that quality is within a specific norm that depends on the specific construction needs, for housing, infrastructure and many special applications. But the production chain starts with stones that are not following any quality norms but are result of natural processes. Geological exploration is done in order to know available qualities as early as possible in the production process.

The result of this exploration is a block model of the deposit(s), and the Optimizer and Scheduler are the tools to do quality assessments and scheduling based on it.

However, a block model is not reality, but only an approximation that is as good as the exploration efforts that were put into sampling, lab analyses and geostatistical modelling. This is good enough for calculating yearly schedules, but definitely not sufficient for daily planning.

Functionality of the Planner

For this reason, the Planner does not work with the block model, but does it's job based on blast hole samples. With AthosGEO Blend it is of course always possible to have the output of the Scheduler displayed in the background, either as block model or some other graphical representation.

The Planner collects blasthole sample data, blast qualities and plannings all in a database. That database can be used later on for a retrospective test of the block model, but otherwise it does not depend on it. 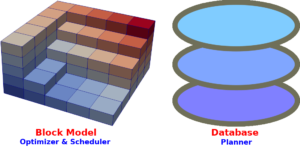 The planning process is interactive: the user proposes blast piles that should be loaded, including minimum and maximum tonnage limits, and the Planner will tell whether and how this is possible. Quality constraints are of course followed in the same way as with the Optimizer and the Scheduler.

Once the planning is acceptable for the quarry manager, the result can be exported in different formats: 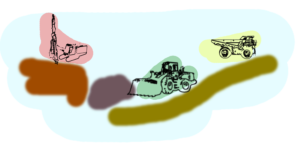 Depending on your organization, the Planner module will be used by the same person as the Optimizer and Scheduler, or not:

In order to allow for these different scenarios, licensing is now such that a customer can buy