No, no big breaking news this time, and also the Scheduler that you can watch in operation right here is not. Still a number of interesting small steps: AthosGEO is constantly moving forward, both the View and the Blend variant. As is also the underlying ParaView software. And already following these steps requires a serious effort, althoughs not all the steps are of equal size in that respect:

Just to give you an impression: 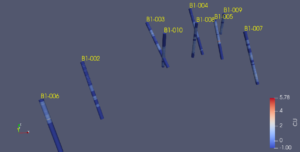 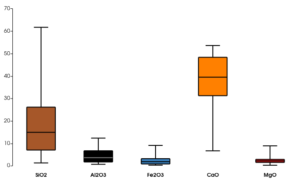 The next thing on the agenda is now the Planner tool that was announced in the previous blog.

While all the above improvements are available for users of both AthosGEO View and Blend, the planner will be a tool for the professional users in the cement industry, thus the AthosGEO Blend variant. For them it was a much requested feature: Once the potential of the deposit is estimated with the Optimizer tool and a long or medium term schedule is calculated with the Scheduler, the logical next question is: How can we ensure now to properly follow that schedule? The answer is: regular blasthole sampling together with the new Planner tool for short term planning. Short term planning here in the sense of daily load and haul planning.

Side remark: In many operations it is said that such short term planning is not required because a cross belt analyzer behind the crusher is doing the job. However, this is often not true because behind the crusher you can only see afterwards whether the right material was delivered, while short term planning tells you what to send before the action.

Once proper blasthole samples have been taken and analysis are ready, the new Planner module will support you in two steps:

With this you will be able to not only calculate ambitious long term plans, but also realize them during daily operations.

Not only for Programmers

Long promised, but now it has come true: AthosGEO has arrived on Gitlab. For AthosGEO View this means that it is now really Open Source: You can browse through the entire source code and download it completely or selectively. You can compile it yourself (after having compiled ParaView first!) or just have a look at how things are done in detail.

But Gitlab is much more! For example you will find there an issue tracker: Often it's the only with the users that certain specific functions or function sequences are not doing what they are supposed to do. Of course you can always send me a mail, but if you see that it is a real bug, the best idea is to post it to the issue tracker. Normally this should be a description of how to reproduce the problem, and maybe even a specific data set is required. The latter you can send of course to me directly if it is not supposed to be public, and it helps a lot to get issues fixed. Also suggestions can be entered in the issue tracker - including the option to discuss them right there. And if the ideas are really good and time allows, dreams may even come true!

AthosGEO Blend is still not Open Source - for the reasons that were explained already here. Still it is on Gitlab where you also find an issue tracker with all that belongs to it.

Some users have the needs, skills and dedication to go beyond what the software is originally delivering, and AthosGEO (both View and Blend) give you the opportunity to do it not only with C++ (plus recompilation of the entire package - ParaView and AthosGEO), but also with Python. AthosGEO even comes with a built-in Python interpreter, so for writing your own Python filters you do not even need to install your own. However, this is not new: it is a feature that is inherited from ParaView from the beginning.

What's new - and with this we are coming back to the ParaView version updates -: With the latest update of both ParaView and AthosGEO, also the state files (reflecting your entire pipeline) can be saved as Python files - giving you additional power to finetune the software for your specific needs.

That's it for today - a little bit more technical and mostly for those who have already started to work with the software. More input will follow soon!